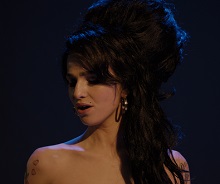 The film is from STUDIOCANAL, Focus Features and Monumental Pictures with Sam Taylor-Johnson directing. Taylor-Johnson is calling the shots from a screenplay by Matt Greenhalgh, well-known for his work writing biopics; the director previously helmed his film about John Lennon, Nowhere Boy, in 2009.

Winehouse sold more than 30 million records worldwide and is widely regarded as one of the greatest singer/songwriters of all time. The film examines her genius and creativity during her tragically short life.

Taylor-Johnson said: “My connection to Amy began when I left college and was hanging out in the creatively diverse London borough of Camden. I got a job at the legendary KOKO CLUB, and I can still breathe every market stall, vintage shop and street... A few years later Amy wrote her searingly honest songs whilst living in Camden. Like with me, it became part of her DNA. I first saw her perform at a talent show at Ronnie Scott’s Jazz Club in Soho and it was immediately obvious she wasn’t just ’talent’… she was genius.

“As a filmmaker you can’t really ask for more. I feel excited and humbled to have this opportunity to realise Amy’s beautifully unique and tragic story to cinema accompanied by the most important part of her legacy – her music. I am fully aware of the responsibility, with my writing collaborator – Matt Greenhalgh – I will create a movie that we will all love and cherish forever. Just like we do Amy.”

Owen added: “Amy Winehouse is the greatest musical talent of the 21st century so far. But like so many female icons, the tragedy of her death has seemed to obscure the triumph of her talent…the fun of the noughties, the craziness of Camden, her youth and brilliance – we want to reclaim that for her, with this film.”

The Amy Winehouse Estate commented: “We are thrilled that STUDIOCANAL, Focus Features and Monumental are making this movie celebrating our daughter Amy’s extraordinary music legacy and showcasing her talent in the way that it deserves.”

Belgravia: The Next Chapter gets underway

Production is due to get underway this week on Belgravia: The Next Chapter, with filming set to take place in London, the Home Counties and Edinburgh.

Studios Spotlight - Behind the scenes at Mount Pleasant Studio

As featured in our new World of Studios UK, Mount Pleasant Studio is one of the most centrally-located filming facilities in London. We caught up with the studio’s Richard Lewisohn to find out a little more about the appeal of the venue, and the types of production it hosts.

Filming gets underway this week on Mary and George, starring Julianne Moore, for AMC and Sky Atlantic.

Paramount+ has continued to ramp up its slate of original UK drama commissions with an order for a series adaptation of Jane Casey’s best-seller, The Killing Kind.

Directors announced on S2 of Lord of the Rings: The Rings of Power

Amazon Prime has announced three directors for S2 of Lord of the Rings: The Rings of Power, currently in production in the UK.