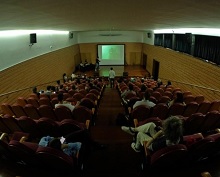 FEST’s Pitching Forum, the international film financing and co-production event, has opened a call for a new category: Series.

The event, now in its 19th edition, focuses on the facilitation, development, and financing of film projects and gives filmmakers the opportunity to pitch to industry producers, distributors, fund managers and investors.

The call for Series is open to series projects in any development phase, from concept to post-production, that are looking for financing, international co-productions or post-production services.

The selected finalists will have five minutes to pitch their project to the international film industry decision-makers. They will also have access to a three-day training headed by established project- development experts, who will guide them to prepare a perfect pitch.

More than 250 projects from all over the world have been presented at Pitching Forum, many finding partners, and later being presented at international festivals such as Berlinale. Among the experts present during the event were renowned industry figures such as Finola Dwyer, Tim Corrie and Gareth Wiley.

Filmmakers who are looking for support for their projects can apply now.


Projects submitted until 6 February 2023 will enjoy an Early Bird discount - €50 - from then on the regular fee of €60 will apply, until the deadline of 31 March.