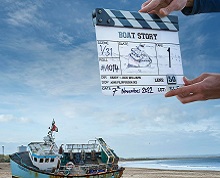 The series centres on Janey and Samuel (Haggard and Joseph), two hard-up strangers who stumble across a haul of cocaine on a shipwrecked boat.

After agreeing to sell it and split the cash, they quickly find themselves entangled with police, masked hitmen, and a sharp-suited gangster known only as ‘The Tailor’, played by Tcheky Karyo. Joanna Scanlan, Carig Fairbrass and Phil Daniels co-star.

Harry and Jack Williams, writers and managing directors of Two Brothers Pictures said: “We loved making The Tourist and Boat Story picks up where that left off - tonally at least. It’s a morality tale and a thriller and other things that make it hard to define even though we seem to be attempting to define it.

“It’s full of vulnerable, messed up and eccentric characters and we’ve cast some of our favourite actors to play them. We are excited to bring this to life along with our fellow directors.”

Christopher Aird, Two Brothers Pictures head of drama, added: “Boat Story will surprise the audience from the first minute. Harry & Jack are challenging conventions we've come to second guess in screen drama. I think this is their boldest show yet and very exciting.”

The BBC’s Writersroom scheme is opening its next Open Call submissions window on 9 November; the window is open until 7 December at 12 noon.

Diving Services UK specialise in diving co-ordination for media projects to facilitate filming in and around water. We are based at Pinewood Studios, managing a… more Call: 01753 785401   |   Add to Shortlist

Maritime Film provides marine coordination services to the Film, Television and Media Industries. The company is owned and managed by Ian Biles and operates from… more Call: 023 9252 4490   |   Add to Shortlist