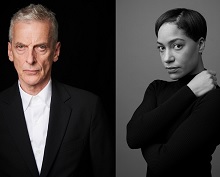 The 8 x 60 thriller is produced by Tod Productions and STV Studios, and is written by Paul Rutman. It centres on two detectives who, following an anonymous phone call, are drawn into a confrontation over an historic murder case.


Capaldi plays Detective Chief Inspector Daniel Hegarty, a well-connected man determined to protect his legacy while Jumbo is Detective Sergeant June Lenker, a young woman in the early stages of her career.

Apple TV+ has a hefty production presence in the UK with a tranche of major projects currently filming or in prep including Disclaimer, Hijack, Invasion S2, Masters of the Air, Ted Lasso S3 and the second series of Slow Horses, to be delivered as S3and S4. The streaming giant has also ordered a new take on the Dick Turpin story, starring Noel Fielding.

Details – including exact shoot dates and key HoDs on all these projects can be found on Production Intelligence; non-subscribers can click here to request a walkaround of the site.