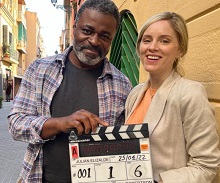 World Productions' Simon Heath will exec produce. Collie Cousins will exec produce for UKTV alongside BBC Studios director of drama Martin Rakusen. The series is created and written by Ben Richards with episodes from Lauren Klee, is directed by Jill Robertson and Jennie Paddon and produced by Ken Horn.

The Diplomat is the latest in a line-up of UKTV Original dramas for Alibi, including Annika, starring Nicola Walker, and Ragdoll, co-commissioned with AMC and produced by Sid Gentle Ltd. Traces also returned for a second series earlier this year and the new series of We Hunt Together is set to air next month.