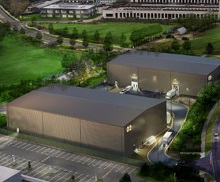 The Depot comprises  two purpose-built, 20,000 sq ft soundproofed production units that are a 10-minute drive from the city centre, adjacent to the future Littlewoods Studios site.


They will be managed by Liverpool Film Office with the aim of developing and strengthening local talent and consolidating the city’s already film-friendly reputation.

Liverpool is a well-established international production hub, with grand civic architecture often doubling for London and New York. It is currently experiencing the busiest time on record for film and TV production.

It is predicted that The Depot will create a £24m economic boost for the regional economy, creating 360 new jobs and 760 indirect jobs.

Don't miss out on your chance to appear in our shiny new Studios Supplement! Just about a week left to book a space; get in touch now for more details...

Head of Liverpool Film Office, Lynn Saunders, said: “We’ve been campaigning for studio space since before Samuel L Jackson was running round the city in a kilt!

“Over those years we’ve gotten very creative around providing alternatives to productions who need more than our region’s locations – but to now be able to actually show off two enormous purpose-built structures, that will be filled with crews and stars, filmmakers can really unleash all their creativity in Liverpool.

“For us it’s more than a space for sets, it’s an opportunity to build a production hub in the city region, where we can embed the local filming infrastructure network and develop training opportunities to future-proof Liverpool’s prime position in the industry.”


Seasoned TV writer Jimmy McGovern added: “I love the fact that Liverpool has these new TV and film studios. Everyone knows how great the city is in hosting productions, but we can’t always complete a shoot here due to a limited studio capacity.

“These new studios will be a huge shot in the arm for the sector and especially for the hugely talented army of people who make the magic happen off screen, as they will save a lot of time wasted having to travel to other studios elsewhere.

“It’s also great news for young kids in our city and region wanting to get into the industry and in particular it’ll be a brilliant boost for the Kensington community which desperately needs this type of investment and the fantastic job opportunities it presents.

“In an industry of lightning fast innovation and technological improvement, these new facilities are exactly what the city region needs to show the industry that as well as our iconic architectural back drop, we have world class filming and production facilities. It’s a welcome piece of good news in what has been a challenging year.”