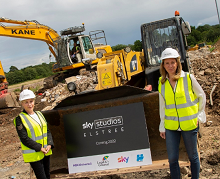 Hertsmere Borough Council has given the green light for construction to begin on Sky Studios Elstree, due to open in 2022.

The development is a joint project between Sky, NBCUniversal and financiers/developers Legal & General; it is estimated that it will provide more than 2000 jobs and £3bn of production spend in the first five years.

Work to clear the site – which covers the equivalent of 22 football pitches – will begin this month. It will comprise 12 sound stages, with flexibility to scale them up or down by merging or sub-dividing them simultaneously.

Secretary of state for culture and MP for Hertsmere, Oliver Dowden, said: “The film and TV industry plays a vital role in the UK’s economy, with its programming keeping us informed, entertained and connected over the past few months. Sky Studios Elstree will become home to the best-loved films and TV shows of the future, championing British creativity on the global stage.

"It will also bring investment, jobs and opportunities to people across Hertsmere - cementing Elstree & Borehamwood’s reputation as ‘The British Hollywood’.”

The new facility is one of several currently under construction or in development around the UK as demand grows for studio space. Others in the pipeline include major new sites at Ashford, Dagenham and Liverpool, with OMA Studios in Enfield opening this summer.

NEC Arenas to open for filming

Chris Evans, editor of our sister site, KFTV, talked exclusively to Guy Dunstan, managing director of Arenas within the NEC Group, about how and why they are offering their facilities for film and TV shooting.

Dagenham Studios – set to be the largest film facility in London – looks set to go ahead after unanimous planning approval was granted at a Barking and Dagenham council meeting last night (6 July).

BFC gets budget boost of £4.8m

The British Film Commission (BFC) has received £4.8m from this week’s Budget to expand its remit of promoting the UK as a production hub for studio space investment.

The BFI has released figures illustrating the record-breaking impact made by inward investment high-end TV projects over the last year.

Action Image Productions are proud to announce their expansion and development of the Stage A studio at Cheltenham Film and Photographic Studios. The 3,500 square… more Call: 0800 298 3732   |   Add to Shortlist

Cherryduck Studios are based close to Tower Bridge in Wapping, East London. We have 6 studios all highly equipped for your Photography, Film & TV… more Call: 020 7480 5057   |   Add to Shortlist

Holborn Studios has provided definitive studio hire for 40 years. Currently there are 7 studio spaces for day hire, we have a broad range of… more Call: 020 7490 4099   |   Add to Shortlist

Hill Farm Studios and Workshops are located in Leavesden Watford. The site is approximately 1 mile from the M1 and M25 and are adjacent to… more Call: 01923 889522   |   Add to Shortlist