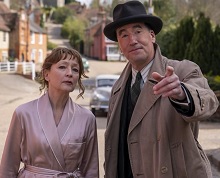 The Anthony Horowitz-penned series - based on his books of the same name - are from Eleventh Hour Films, with Moonflower Murders being made in association with Salt Films (producer Suzanne McAuley’s Ireland-based company) for the BBC and PBS Masterpiece. Jill Green exec produces.

Horowitz said: “I’m very happy that Magpie Murders is going to be shown on BBC – its natural home. I had such fun writing the scripts and they’ve been brought to life by a brilliant director and cast.”

Green added: “I’m so thrilled that this playful, distinctive murder mystery will now reach an even wider audience.”

Eleventh Hour Films has a busy production slate – the company is currently in production on the third series of Alex Rider as well as new legal drama The Killing Kind, and is in prep on a new iteration of Rebus.

Full details of all these projects can be found on Production Intelligence.

C5 drama Under Her Skin films in Malta

Traffic Management Logistics Ltd is a supplier of quality ‘Traffic Management’ to the TV, Feature, Commercial and Events Industries. We specialising in providing our customers… more Call: 020 7993 5743   |   Add to Shortlist

Why use On Set Traffic Management Ltd: Our tried and tested service of which has operated since December 2011, we and many others believe is… more Call: 07946 151120   |   Add to Shortlist