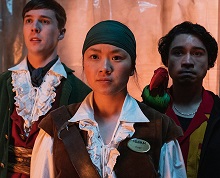 BBC One has greenlit a new drama, Nightsleeper from Euston Films, producers of Wreck.

The real-time suspense thriller is set on a sleeper train travelling from Glasgow to London, while a government agency desperately tries to intervene in the rapidly-escalating events on board.

Can two people who’ve never met, one on the train and one not, work together to save the lives of its disparate group of passengers as the Heart of Britain service hurtles towards what might quite literally be its final destination?

Writer Leather said: “I couldn’t be more excited to work with Euston Films and the BBC to drive the engine of this real-time thriller and take our audience along for a ride full of personal intrigue, political manoeuvring and danger. By the time dawn breaks at the end of this journey, no-one involved will ever be the same again”.

Harwood and Spanos added: “The classic on-screen genre of a runaway train is given a thrilling modern twist by screenwriter Nick Leather and we find ourselves with a small group of people in a race against time. We can’t wait to film this in Scotland next year.”