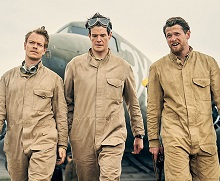 The BBC has confirmed the recommission of Steven Knight’s drama, that follows the story of the early years of the elite special force; the series comes from Kudos.

Production Intelligence subscribers first received confirmation of Series 2 back in March, and have since had updates on the prep and filming schedule plus key HoDs including the line producer.

SAS: Rogue Heroes is based on Ben Macintyre’s best-selling book of the same name, with episode one attracting 9.4 million viewers (28-day all screens figure – making it the BBC’s third biggest drama launch of the year so far.

Creator, writer and exec producer Knight said: “After the roaring success of Rogue Heroes I’m delighted to be embarking on the next chapter of the story. Series two will take the SAS into mainland Europe and will take our heroes to the limits of their endurance.”

Karen Wilson, executive producer and joint managing director of Kudos, added: “We’ve been blown away by the reaction to the first series and are so pleased to be bringing our SAS Rogue Heroes back for more. Steven’s incredible storytelling has captivated audiences and there is so much more story to tell - I can’t wait for audiences to see what’s in store.”

SAS Rogue Heroes Series One was directed by Tom Shankland, and produced by Stephen Smallwood. Executive producers for Kudos were Wilson, Martin Haines and Emma Kingsman-Lloyd, with Tommy Bulfin as executive producer for the BBC.