C5 drama Under Her Skin films in Malta 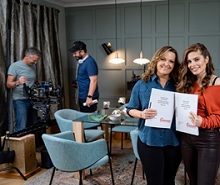 Gaumont is producing the 4 x 60 series, a psychological thriller about a woman who, on the surface, has it all.

Under Her Skin is created and written by Jo Rogers who is also associate producer. Executive producers for Gaumont are Alison Jackon and Jessica Connell; Adrian McDowall directs.

Joyner plays Laura, a woman whose life seems perfect, on paper – a loving husband and two beautiful children. But the cracks in her family behind the scenes are soon exploited by charismatic stranger Emily (Shenton), as the latter nurtures Laura’s neuroses. The two women are also bound by a shared secret…

Jackson said: “We are thrilled to bring this contemporary, provocative story to life in our first project with Channel 5. Jo Joyner and Rachel Shenton are a hugely dynamic duo and we can’t wait to see them bring these characters to life.”

Joyner added: “I’m really looking forward to working on this gripping thriller for Channel 5. It is really great to be working with Gaumont, an almost exclusively female team and I feel this is reflected in the brilliant scripts.

“There is such a contradiction with the character of Laura, so focused and organised in her work life and yet chaotic and insecure with her home life. I feel it really resonates. I am so looking forward to working with Rachel Shenton and for us to bring these 2 flawed women to the screen.”

ATA Carnet UK Service and worldwide coverage. We recognise the importance of accurate paperwork, to you, your peace of mind and your business. Dynamic Dox… more Call: 0845 040 5888   |   Add to Shortlist

Precision Cargo Services are a logistics partner within the Film, TV industries sector. We specialise in Film production logistics bringing your projects to life. Our… more Call: 01753 650551   |   Add to Shortlist