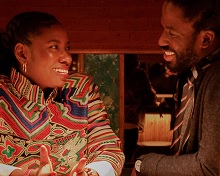 The pilot was adapted from the web series co-written by Adjani Salmon and Ali Hughes, and won several gongs and awards nominations.


Big Deal Films is co-producing the full series run alongside A24; the latter will also distribute internationally.


Loosely inspired by real life events, Dreaming Whilst Black follows aspiring filmmaker Kwabena (Salmon) in and out of reality as he tries to make it in “Babylon.” The problem is he’s broke, Black and born into a Jamaican family who wishes he was an accountant.

Co-executive producer Dhanny Joshi, Big Deal Films, added: “We are thrilled for the opportunity to continue telling Kwabena’s story in creative collaboration with A24, BBC Comedy and the rest of our incredible cast, writers and crew.

“The response we’ve received from audiences who continue to discover the Dreaming Whilst Black pilot is one of the most deeply rewarding experiences we’ve shared. To hear viewers express how the show made them “feel seen” has been inspirational, and we're so grateful to the team at BBC Comedy and A24 for making the series a reality.”

The other executive producers are Thomas Stogdon and Salmon. The series will be directed by Jermain Julien and Joelle Mae David and produced by Nicola Gregory.

The original web series was co-written by Salmon and Ali Hughes and was created by Salmon, Max Evans, Laura de Sousa Seixas and Natasha Jatania of 4 Quarters Films.

Strategic advice and ongoing support was provided by Bal Samra of Bizet Media.

CLC FILM LOCATION CATERING Exceptional catering from the company that began location work in 2008 and have grown into one of the most progressive and… more Call: 07985 914385   |   Add to Shortlist

Chorley Bunce film and TV location catering operates out of Harrogate but covers the entire UK & EU. Chorley Bunce has the capabilities to meet… more Call: 0845 308 0062   |   Add to Shortlist

The Event Team provides top quality homemade locally sourced location catering for films, TV and commercials all over the UK, Europe and USA. All food… more Call: 01508 483833   |   Add to Shortlist

With over 30 years of experience, we have kitchens, catering appliances and refrigeration solutions which are ideal for onset and location catering fulfilment. We deliver… more Call: 01253 863305   |   Add to Shortlist

CHNO - The chemical formula for caffeine! CuppaCHNO is a bespoke film and TV craft services operating out of a vibrant, colourful converted horsebox. We… more Call: 07535 823590   |   Add to Shortlist

craftwerk. crafted to bring you deliciously made food, speciality coffee and tasty treats. For your crew that's grafting, we’re here crafting! With over 10 years… more Call: 07786 927555   |   Add to Shortlist