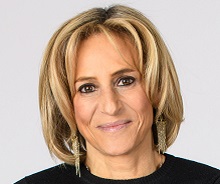 In her first major speech since leaving the BBC, the broadcaster, journalist and author will examine the role that TV has to play in speaking truth to power.

Maitlis’ lengthy career has included news broadcasting for a tranche of outlets including NBC Asia, TVB, Channel 4 and SKY.


She played a key role in the BBC news team for more than 15 years, latterly as the Newsnight anchor. More recently, her high-profile interview with Prince Andrew has spawned two spinoff dramas, one of which Maitlis herself is involved in.

Having departed the BBC and signed with Global, Maitlis will once again team with Jon Sopel for a new project under the Global banner.

Maitis’s lecture will cover the complex world of modern journalism where the threat to reporting the news and holding power to account across the globe, comes not just with intimidation and outright censorship, but in more nuanced ways with language and normalizing the extraordinary.

Maitlis said: "The list of extraordinary people who have given this lecture before me makes this an honour beyond belief. It is a massive privilege - but also a responsibility. To get this right. The need to hold power to account without fear or favour is more urgent than ever before.

“We are good at documenting censorship and intimidation of journalists around the world. But we are sometimes too slow to recognise how and when it is happening in more subtle ways, closer to home. In many places the political actors, their style of communication and their relationship with the truth has changed.”

The Festival’s executive chair, Fatima Salaria, said: “Emily Maitlis has delivered the news into our living rooms for over 20 years but could never be described as a news reader. Sharper and edgier than was comfortable for her last employer she is happiest when cracking open a story and not just reporting it.