Major new film and TV studio to open on Anglesey 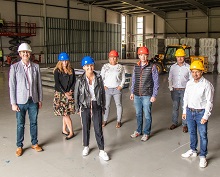 A major new £1.6m film and television studio is set to open on Anglesey to optimise the increasing number of productions taking place across North Wales, UK.

The hub will provide facilities for both local and international production companies who wish to film in the area.

Established by Rondo Media and S4C's commercial arm, S4C Digital Media Limited, with the support of the Welsh Government through Creative Wales, the £1.6m studio facility will provide major opportunities for attracting inward investment in the creative sector to North Wales.

Aria Studios will become a hub for talent and skills development with plans to provide training and development opportunities for careers in the screen sector, working in partnership with colleges, universities and media training agencies across the country.

It will also provide jobs for those who wish pursue a career within the sector. The aim is to develop sustainable, freelance work opportunities in drama production across the entire spectrum — from electricians, designers, painters, set construction to make-up, wardrobe, lighting, creative production staff, directors and actors and extras.

Aria Studios will assist productions to deliver environmentally sustainable production by providing solutions to minimise the carbon footprint during production.

“This investment will be a major boost for the industry in North Wales,“ said Rondo Media's chief executive, Gareth Williams. “We are grateful for the support of S4C's commercial arm, Cymru Greadigol, Wales Screen, the British Film Commission and Cyngor Sir Ynys Môn in enabling this exciting development.

“With such an emphasis on securing growth and investment across the creative industries, and in particular in the nations and regions, we see a real opportunity here to grow a brand new facility which will offer sustainable long-term employment opportunities in the region and build on several skillsets that already exists in the area. We look forward to collaborating with a wide range of partners to see Aria Studios flourish and grow.

S4C's chief executive, Siân Doyle said: “Creating opportunities to nurture talent in the creative sector across the whole of Wales is a key priority for S4C and we're thrilled to support this fantastic facility in Anglesey.

“Working in partnership with Rondo Media and Creative Wales on this important investment though SDML is an exciting opportunity to support the economy in North Wales. This top of the range development will attract high profile productions, and we look forward to creating opportunities locally and build our presence even further in North Wales.“

The deputy minister for arts and sport, Dawn Bowden added: “Demand for studio space is at an all time high and this facility will put the north of Wales on the map, providing much-needed space for local and incoming productions.

“A new film and TV studio facility will bring a huge economic boost to the island, the impact of which should be felt across the whole of the north. I'm delighted that the Welsh Government is partnering with S4C on this exciting new development.“

Last year The Knowledge published its inaugural and well-received Studios Supplement, which covers in detail new, emerging and existing studio spaces in the UK. Due to its popularity, we are publishing it again this year, in both print and digital form; to book a space please email Sarah.Keegan@mbi.london or Alex.Curry@mbi.london.

This article was first published on our sister site, KFTV.

The Acolyte, a major new Star Wars spin-off series for Disney+,  is due to film from November at the shiny new Shinfield Studios near Reading.

First Sunset Studios facility in the UK gets planning approval

Kinetics Space Studios is a new state-of-the-art Film/Photographic/TV studio complex in the heart of the midlands. We have 2 very large studios; The 'Big One'… more Call: 01536 333977   |   Add to Shortlist

The Cotton Store is a unique 2,400 sq ft shoot space in the Haringey Warehouse District available to hire for filming and photo shoots. The… more Call: 07789 287350   |   Add to Shortlist

London Film Studios is a brand new studio complex in north London. Built in 2021 it comes fully equipped with all the latest technology and… more Call: 020 8804 9860   |   Add to Shortlist