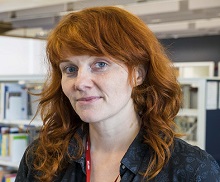 The 6 x 30 minute series by Caroline Moran (pictured), best known for Hullraisers and Raised by Wolves, centres on five women on the ultimate hen weekend, as the world happens to end during their break in an isolated holiday cottage in Wales.


Emerging from quarantine into the post-apocalyptic world, they find the male population has almost entirely wiped out and Britain is now a hellscape in which only the very fittest will survive…

Moran said: "I can’t bloody believe I am getting to make a sitcom for BBC Two! That’s pretty much all I’ve ever wanted in life. The nation is now officially invited to our never-ending post-apocalyptic hen do. I guarantee high drama, tons of jokes, massive surprises and lots of penis-themed pound shop tat!"

Phil Clarke, VAL joint managing director, said: “We are thrilled to be working with Caroline Moran on her new BBC Two series. She is the most original and joyous writer. The apocalypse has never been funnier."


Filming begins early next year; the executive producers are Clarke, Helen Williams and Roberto Troni. VAL is part of BBC Studios’ portfolio of invested indie production companies with whom they hold a minority share.

Welcome to U-Drive, a family-owned group of brands covering the UK with traditional vehicle hire & sales and transformational mobility solutions. With physical locations across… more Call: 0800 980 9966   |   Add to Shortlist

Supplying on-location facilities vehicles to the British Film and TV industry for outside broadcasting since 1992. With a fleet of over 150 vehicles, HNA Facilities… more Call: 0161 707 6443   |   Add to Shortlist

With over 45 years’ experience, Gapton Vehicle Hire offers a friendly, reliable service that is second to none. We have gained an excellent reputation for… more Call: 01493 650373   |   Add to Shortlist

Our entire fleet of custom-built Location Facility Vehicles has been specially designed for the TV & film industry, manufactured in the UK. Our purpose-built premises… more Call: 01763 244886   |   Add to Shortlist

On The Move Location Services

Here at On The Move we specialise in supporting the television and film industry with quality location services for hire at exceptionally competitive prices. We… more Call: 07842 705561   |   Add to Shortlist