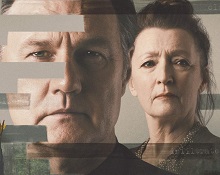 The drama, made by House Productions, followed a tense investigation into two shocking killings which shatter an already fractured community, and is inspired in part by real events in the Nottinghamshire mining village where Graham grew up.

The second series will return to Graham’s home county, and will continue to explore the themes of the lives and legacy of those governed by Britain’s industrial past with stories from communities of the 'red wall' towns.

Series two will again comprise 6 x 60 episodes with Graham writing all six. He also exec produces alongside Juliette Howell, Tessa Ross and Harriet Spencer for House Productions and Ben Irving for the BBC.

Graham said: “I’ve been so deeply moved by the response to Sherwood. These stories come from my home, and I want to specifically express gratitude to my community for whom I know these subjects can be difficult, but - I hope - important ones to explore.

“The East Midlands and former 'red wall' areas like it are never just one thing - politically or culturally - and it’s been the honour of my life to give voice and character to a place I love. It’s a county of great stories and legends, past and present, and I can’t wait to show audiences more.”

Howell and Ross added: “No single place is defined by just one story, and it was always our intention, and hope, that James would get to return to the wider community of Nottinghamshire to build on the world created in Sherwood and explore more characters and their stories, delving into the issues and relationships that have long shaped them.”

Stable & Ground provides a modern take on craft services by blending a specialist menu with a team of highly experienced baristas. We believe that… more Call: 07782 298652   |   Add to Shortlist

On Location Coffee Co. Freshly roasted espresso coffee and other hot beverages for film and tv productions when on location or at studio. Our trained… more Call: 07932 608732   |   Add to Shortlist

Owner and head chef Ebbie knows the importance of catering on a TV production. Early location shoots for the crew requires a good breakfast; a… more Call: 07782 369896   |   Add to Shortlist