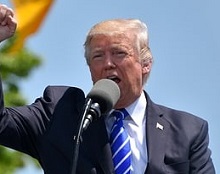 The dramatisation marks the first television project for Jones, and will explore the events of how a small Scottish community stood up against Donald Trump and his golf course development.

The 4 x 45 drama is based on Anthony Baxter’s award-winning 2011 documentary of the same name.

When multi-billionaire Donald J. Trump decides to build a luxury golf course in the middle of a treasured Scottish nature reserve in Aberdeenshire, and the Scottish Government overturns its own environmental laws to give him the green light, it’s the locals who are forced to pick up the fight to preserve their way of life and their homes.

Kirk Jones, whose credits include Waking Ned, Nanny McPhee, What To Expect When You’re Expecting and My Big Fat Greek Wedding 2, said: “There was a reason why the world’s media was drawn to this story in 2006 and why there was such a determined effort to prevent Anthony Baxter's excellent documentary of the same name, being released in 2011.

“A special site of scientific interest was stripped of its status and a community of decent people faced an unwanted aggressor.  This is a story that needs to be told to a wider audience and I am thrilled to be working with this team on what we plan to be a humorous, dramatic and emotionally engaging TV series set in one of the most stunning locations in the British Isles.”

Allan Niblo, co-founder of Vertigo Films, said: “Trump’s presidency is arguably one of the most insane periods of modern history, and yet it was this story – one of rebellious spirit, human endeavour and genuine fear for the planet – that we felt compelled to dramatize. Kirk is the perfect person to retell this story having captured so brilliant the strength of community, heart and spirit so well in Waking Ned.”

Pistol, Danny Boyle’s series biopic of iconic band The Sex Pistols, filmed across a variety of London locations for Disney+.

On Location Coffee Co. Freshly roasted espresso coffee and other hot beverages for film and tv productions when on location or at studio. Our trained… more Call: 07932 608732   |   Add to Shortlist

craftwerk. crafted to bring you deliciously made food, speciality coffee and tasty treats. For your crew that's grafting, we’re here crafting! With over 10 years… more Call: 07786 927555   |   Add to Shortlist

CLC FILM LOCATION CATERING Exceptional catering from the company that began location work in 2008 and have grown into one of the most progressive and… more Call: 01656 728734   |   Add to Shortlist

Dream Catering are specialists in TV & Film location catering. We are based in the Westcountry and travel all over the UK to cater for… more Call: 0330 043 6867   |   Add to Shortlist

Owner and head chef Ebbie knows the importance of catering on a TV production. Early location shoots for the crew requires a good breakfast; a… more Call: 07782 369896   |   Add to Shortlist