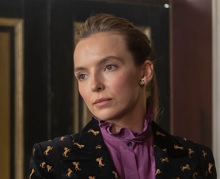 Jodie Comer is set to star in a new feature called The End We Start From, based on the novel by Megan Hunter.

The story is set in a London submerged by floods, where a young mother (Comer) has to try to find her way home with her newborn baby. Mahalia Belo directs from a screenplay by Alice Birch.

As first reported on Deadline, the film is produced by Leah Clarke and Adam Ackland for Sunnymarch, Liza Marshall for Hera Pictures and Sophie Hunter and Amy Jackson.

The exec producers are Comer, Benedict Cumberbatch, Cecile Gaget and Sébastien Raybaud for Anton and Eva Yates for BBC Film.

Production Intelligence subscribers can log in from 11 May for more details on The End We Start From, including shoot dates and the name of the line producer; non-subscribers can click here to request a free online demo.

The producers said: “The End We Start From is very close to our hearts. Megan’s heart-wrenching novel, and Alice’s wonderful adaptation, present a story about motherhood, separation, social and environmental upheaval, and those primal instincts in us which draw moments of joy and inspiration out of the chaos.

“We are incredibly excited to have Mahalia and Jodie lead this talented creative team in making what we know will be a resonant, riveting film.“