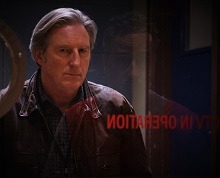 Written and created by Paul Matthew Thompson and co-created by Jonathan Fisher, the series finds the retired detective working in a consultancy role when he resumes his partnership with his former protégée, DI Carol Farman, played by Bronagh Waugh, who is now in charge of investigations.

Fisher, who is MD at West Road Pictures, the production company behind the 4 x 120 series, will exec produce alongside Thompson and Ingrid Goodwin. Julia Gilbert is the writer of episode three. Juliet Charlesworth produces; Bryn Higgins, Noreen Kershaw and Paul Gay direct.

Dunbar said: “Ridley has begun shooting and we really couldn’t be off to a better start. Despite the wintry weather, everything from cast and crew right down to the catering is excellent. Bronagh Waugh has stepped into her character’s shoes seamlessly and we have been joined by some great actors with more to come.”

Fisher added: “It’s a real thrill for filming to be underway with such a top-rate cast starring alongside Adrian Dunbar and led by a superb production team. We can’t wait to share this absorbing new detective series with our audience.”