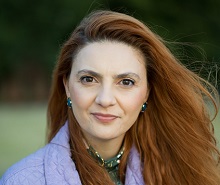 Big Light Productions, the independent London-based production company led by writer/producer Frank Spotnitz, has announced the latest recipient of their annual writers’ apprenticeship - now in its fifth year - which provides writers from the prestigious Serial Eyes programme hands-on practical experience in a writers’ room and collaborating on local and international projects.

Screenwriter/director Geo Doba (right), who is from Romania, has won a placement to work alongside Spotnitz, creative director Emily Feller and the wider Big Light team.

The production company – which is behind high-end dramas including Leonardo, The Man In the High Castle and Medici – invited Geo to participate in their successful writers’ programme after she completed the prestigious Serial Eyes postgraduate television training programme for television writers and producers in Berlin, where Spotnitz is a founding tutor.

During her apprenticeship she will observe and participate in writers’ rooms and new series development, including Big Light’s slate of podcasts, which are part of the company’s recent deal with Audible and the Vespucci Group.


Doba commented: “I am delighted to embark on this journey with Big Light. As a writer, I aspire to create impactful and engaging stories with mesmerizing characters that turn into high-quality series.  I believe this internship puts me on the right track to achieving my goal. I am grateful and honoured to be surrounded by and working with such an awe-inspiring and talented team of accomplished professionals.”

Spotnitz and Feller said: “We are incredibly proud of what we set out to achieve in our writing programme, to support and nurture new writers, and are committed to giving them practical experience and skills. We feel strongly that we have a duty to support new and emerging writers, and as a producer it’s incredibly exciting to hear the new stories and voices that are coming through.

“Geo is a very exciting new voice, and we’re pleased to have her join our team here at Big Light at the start of what I’m sure will be an amazing writing career.”