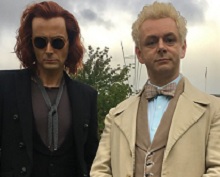 London and Regional Properties has acquired the Pyramids Business Park in Scotland with the intention of expanding it into a major film and TV base called Pyramids Studios.

The property giant will add an additional 120,000 sq ft to the 93-acre site located in Bathgate about 20 miles from Edinburgh, which already houses office, production and studio space.

Deals have already been agreed with occupiers including Amazon Studios and the BBC, and include filming of the second series of Good Omens at the Pyramids Studios.

L&R have set out plans for the opening of purpose-built stages and workshops at the studio in a bid for Pyramids Studios to become a world-class platform for film and TV production in Scotland.

A planning application to expand the studios has already been submitted with future longer-term developments also being considered to ensure the sustainability of the use and filmmaking in Scotland.

L&R will work with West Lothian Council, The Scottish Government and Screen Scotland to deliver the film and TV hub.

This year, The Knowledge published its first annual Studios Directory, a must-have guide to studio spaces around the four nations and regions. You can see the online edition here or email Sarah Keegan to enquire about a print copy.
« Back to News index
Tweets by @TheKnowledgeUK