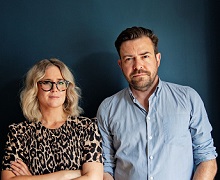 The book, which was released in early August – the pair use the former’s name for authoring – became a Sunday Times bestseller.

Storylining has begun, with the novel being adapted for the screen by Farquharson and Whitehouse themselves.

‘Underbelly’ tells the story of Lo and Dylan, living parallel lives, worlds apart. Lo is the ultimate middle-class mother, all perfectly polished Instagram posts and armchair activism. Dylan is just about surviving on a zero-hours telemarketing job from her flat, trying to keep food on the table.

But when they meet at the school gates, they are catapulted into each other's homes and lives – with devastating consequences. Explosive, sharply humorous, and unflinchingly honest, ‘Underbelly’ slices through the filtered surface of modern women's lives to expose the dark truth beneath.

Whitehouse said: “At a time when the world – online and offline – feels so fragmented, Underbelly delves into the complexity of motherhood under the glare of a smartphone. We wanted to bring to life the daily conflict mothers navigate. Whether ‘stay at home’ (no parent stays at home) or ‘work away’, it feels like we’re being pulled apart searching for something for ourselves and everything for our kids. Throw in social media and it’s a recipe for comparison, competitiveness and combustion…”

Farquharson added: “It is a pleasure to be working with such a talented and inspiring team with such a great track record. From the first page of the book, we had a clear idea of who Lo and Dylan were and it’s a privilege to have the chance to bring them to the screen.”

Thomas Benski, Pulse Films CEO, said: “Anna and Matt’s work speaks to a new generation of women, as they approach topics with a devastating sense of humour, true authenticity and a warm heart. We are thrilled to be able to bring their outstanding fiction debut to the screen, as they continue to expand their repertoire of work. ‘Underbelly’ is a prime example of the perspective we wish to share, as we continue to amplify unique voices in storytelling.”