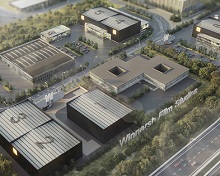 A new film studio in Winnersh that will house the world’s largest virtual production stage is now operational, set to host productions from next year.


The offices and workshops are now open for pre-production, with the stages due to host production from next year.

“Together with our manufacturing partners, SPANTECH, we’re building the new sound stages, including a 30,000 sq ft facility to house the world’s largest VP volume, which we’re developing with the team at Fin Studio Pictures.

“Our stages are robust, high-quality and quick to build. And as 90% of the construction materials are reusable or recycled, they’re more sustainable too.

“We worked with Frasers Property to secure the space for the new studio at Winnersh Triangle Park. It’s in a great location with fantastic facilities already in place. Wokingham Borough Council and the Local Enterprise Partnership are investing in the transport infrastructure to support more sustainable travel, which was another reason for choosing Winnersh.

“One of the biggest challenges our industry is facing is the availability of skilled crew. We have exceptional talent in the UK, but there are not enough people to meet demand, so we’ll work with the local community to offer training and apprenticeships to support the next generation of great British filmmakers.

“The substantial investment in the site will grow the UK economy, support existing local businesses and create hundreds of new jobs at the studios and throughout the wider supply chain.

“We’ve redeveloped existing spaces on the site to create offices and workshops that are in use now, and the stages at Winnersh Film Studios, including the VP stage, will be operational in 2022.”

“Our industry is experiencing a phenomenal growth period. Indeed, the demand for content has never been greater, which in turn is driving the need for greater skills development and additional studio space, services and facilities. The creation of additional stage space capacity such as that at Winnersh Film Studios will help considerably in ensuring that the UK remains a global leader in international screen production.”

Winnersh Film Studios is easily accessible from the M4 motorway, 25 minutes from the M25 and less than 30 minutes from Heathrow airport. The campus has a dedicated rail station providing direct and frequent rail services to central London and Reading.

This year, The Knowledge published the first UK Studios Directory, an invaluable guide to studio spaces of all shapes and sizes around the nations and regions. Print editions are available to key budget-holders within production; click here for more.

Netflix renews Shepperton deal as studio is set for expansion

Netflix has agreed a long-term contract to double the size of its existing production hub at Shepperton Studios, as the site is also set to expand.

Approval has been granted by Richmond Council for the planned expansion of the historic Twickenham Film Studios in west London.

Filming begins imminently on a new Daisy May Cooper project for BBC One with shooting taking place in Bristol and the West Country.

Filming is underway on a new ITV drama, Litvinenko, based on the dramatic real-life events of 2006 in which  Alexander Litvinenko, the former Russian Federal Security Services and KGB officer, died from polonium poisoning.