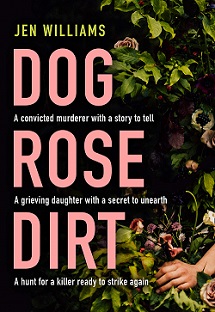 The story is told through the eyes of a young woman whose dead mother’s secret past comes to light through a series of letters to a serial killer. It is Williams’ first crime novel; her background is in fantasy books.

The author (pictured on header shot) said: “I am absolutely thrilled that Gaumont have picked up Dog Rose Dirt as a potential TV series. It’s always wonderful for a writer to talk to people who have enjoyed their book, but what an absolute treat it was to talk to the team at Gaumont and hear all their incredible ideas for an adaptation – and one that is so focussed on conveying the creepy atmosphere of the book and centring a strong, complicated female protagonist.

“As a big fan of crime thriller TV I am over the moon.”

The head of Gaumont in London, Alison Jackson, will lead the development. She said: “The captivating and chilling narrative of Jen Williams’ Dog Rose Dirt will no doubt attract audiences in the UK and worldwide, and with incredibly intriguing characters, we’re really looking forward to bringing the novel to life on screen.”

Netflix is ramping up its commitment to UK-produced scripted content with a commission of five new dramas, all of which will film in the UK next year.