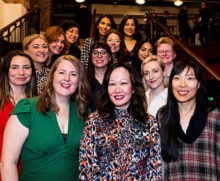 The scheme is aimed at women who are mid-career; submissions from all four nations are welcomed, from all disciplines within film, TV and digital media.

The programme begins in March 2022, with 41 mentees to be selected. During the seven-month programme, each participant will be paired up with senior industry professionals for one-to-one mentoring alongside peer-to-peer training and career and personal development workshops.

The England scheme is run in association with ScreenSkills and is supported by BBC, UKTV, Channel 4, Eon, Panalux and Panavision and International Women’s Network NBCUniversal. The schemes in Northern Ireland, Scotland and Wales are supported by Netflix.

Heading up the scheme is WFTV’s director of mentoring, Tracy Forsyth, who said: “This year’s 4 Nations Mentoring Scheme will ensure we continue to empower talented women in their careers, from technical to creative, business affairs to craft, to break through to greater heights of excellence and impact.”

The closing date for applications is 5pm on Friday 19th November 2021. For further information on how to apply, click here.