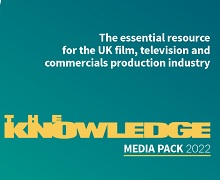 Now in its 35th year, the print edition of the invaluable production services directory is used by decision-makers and budget-holders in production offices all around the UK.

The book has been sent to producers, line producers and production managers at some of the biggest inward investors and SVoDs currently carving out a huge production presence on these shores.


And next year it will be distributed at international film festivals, further broadening its reach.

So don’t miss out! There is a range of attractive advertising packages on offer, designed to get your offering straight to the top of the pile. From fake blood to foliage and from caterers to camera hire, The Knowledge is the place to get your service seen by the people with the hiring power.

Contact Sarah Keegan or Alex Curry who will be happy to talk you through the options.

There is a good reason The Knowledge is still being printed after 35 years, so take a look and see why it is the one-stop shop for the production industry…

The Witcher prequel starts filming in the UK

Filming begins this week on The Witcher: Blood Origin for Netflix, with Sophia Brown (pictured), Laurence O’Fuarain and Michelle Yeoh.