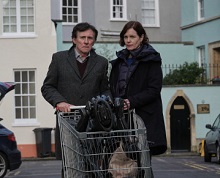 Set in a world ravaged by catastrophic climate change, the Offset ceremony has been introduced to counteract and discourage procreation.


On their eighteenth birthday, every child must choose one of their parents to die as a carbon offset for their own life. Reproduction is considered an ecological crime and so for every new birth there must be a death.

Calder Szewczak said “We both loved Howard's incredible interpretation of War of the Worlds and are hugely excited to see where he's going to go with The Offset.”

“The complexity and emotional dilemma at the heart of The Offset were absolutely fascinating to me,” said Overman, “It’s such a brilliant concept and I knew immediately that I wanted to adapt this world for the screen.”

Urban Myth has recently been filming the third series of The War of the Worlds and earlier this year completed production on The One for Netflix; both projects are also penned by Overman.

Jason Troughton (SFX Supervisor) has been creating physical and practical special effects for more than 30 years. Jason's first SFX supervisor role was on the… more Call: 07966 448282   |   Add to Shortlist