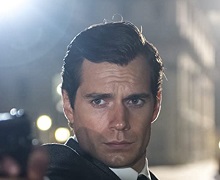 Argylle is using three UK studios in total: Greenford, Park Royal and Bovingdon; some plate shots have already been done in Greece and the US.

The feature is adapted by Jason Fuchs from the novel by Ellie Conway, due to be published at the end of September, following the globe-trotting adventures of the eponymous spy (Cavill). Fuchs also produces alongside Adam Bohling and David Reid.

The UK is enjoying a boom in production, which was able to continue throughout the past two Covid lockdowns by adhering to stringent safety guidelines and supported by a government insurance backstop scheme.

Such is the demand for studio space that new developments are springing up all over the nations and regions, existing spaces are undergoing expansion work and old facilities such as warehouses, distribution units and airfields are being repurposed.

In November, the Knowledge is publishing a special studios supplement, so if you would like to raise the profile of your studio offering, get in touch with Sarah now!