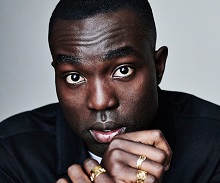 Filming begins next week (16 August) on the second series of The Capture with Paapa Essiedu joining as guest lead.

Ben Chanan writes the surveillance thriller for BBC One; it is produced by BBC One, Heyday Television and NBCUniversal International Studios and stars Holliday Grainger.


Essiedu will play Isaac Turner, a young rising star MP with ambitions for the very top. Indira Varma and Andy Nyman will also join The Capture for series two.

Essiedu said of the role: “I’m so excited to be coming on board with The Capture. Ben has written one of the freshest and most prescient scripts of recent times and I can’t wait to see what this incredible cast and crew can do with it.”

Chanan added: “I am thrilled to be working with Paapa Essiedu on The Capture series two. I’ve honed the story of Isaac Turner, a young, ambitious, idealistic British politician with Paapa in mind, and there’s no actor I’d rather collaborate with in bringing it to life.


"I also feel incredibly lucky to be welcoming Indira Varma and Andy Nyman to the show, where they join the brilliant Holliday Grainger, Ron Perlman, Lia Williams and the cast from series one. A dream cast, across the board”

The first series of The Capture was a big hit for the BBC, growing its live BBC One audience across the series and attracting an average consolidated audience of 7.7 million viewers. On BBC iPlayer, it was 2019’s most requested new title across all genres.

James Kent and Philippa Langdale direct; the executive producers are David Heyman, Rosie Alison and Tom Winchester for Heyday Television, Tom Coan for NBCUniversal International Studios, with Ben Irving for the BBC alongside Chanan and Derek Ritchie. The producer is Kristian Dench.

Aerialworx is your go-to drone operator for all your cinematic, dynamic and creative aerial drone filming requirements in North Wales and Manchester. Aerialworx Wales is… more Call: 0345 459 8899   |   Add to Shortlist

Upper Cut Productions Ltd is a leading provider of remote aerial filming and photography in the UK with over 10 years’ experience. If you're looking… more Call: 07974 382443   |   Add to Shortlist

Brooks Smith Media are based in Hertfordshire near Leavesden Studios, Bovingdon Studios and Shepperton Studios. We carry an Open Authorisation from the CAA which allows… more Call: 01442 800900   |   Add to Shortlist

Aerialworx is the go-to drone operator for all your cinematic, dynamic and creative aerial drone filming requirements in Manchester, North Wales and Scotland.  Established in 2013, with… more Call: 0345 459 8899   |   Add to Shortlist