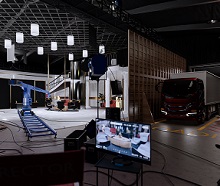 At more than 200,000 sq ft, London North Studios will be one of the largest filming spaces in Greater London.


The project is run by Purpose, a flexible workspace provider, that has already welcomed a Sky show as one of the first productions to utilise the new space.

The new site will comprise five studios and four offices, along with a 300-person dining hall, hair and costume rooms and five acres of outdoor space including an acre of woodland.

Dan Cohen, founder of Purpose said: “We decided to launch London North Studios in response to the soaring demand for high-quality filming space close to central London – demand which is not currently being met. The new studios will also add new interest to this corner of the capital – creating cultural cachet and job opportunities.”

Purpose has prior experience in providing shooting locations. Ed Sheeran, Stormzy and Jorja Smith have all filmed videos at its other creative workspaces in Bethnal Green, Borough, King’s Cross and Tottenham.

The studio is the latest in a tranche of new developments springing up to meet demand, not least from the vital inward investment projects that are so prolific in the UK screen sector economy.

Look out for The Knowledge's Studios supplement, due out in November. Get in touch now to tell us about your studio offering.