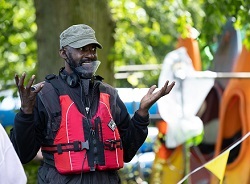 Location filming has begun on a special, hour-long episode of Hollyoaks that is part of Channel 4’s Black to Front, the broadcaster’s diversity project that culminates in a special day of content on 10th September.


Written by Hollyoaks core team writer Thabo Mhlatshwa, the show centres on the pivotal black Deveraux family and including characters past, present and future, played by black and of black heritage talent.

Robinson said: “I’m very excited to be directing this hour long special of Hollyoaks, featuring characters who share my background and heritage.

“Overstanding other people’s cultures, I believe is one giant step towards an inclusive society and Drama is one of the best tools to do that. Music, Dance and Art also play a vital part in giving greater insight basically because we feel it…Heart, body and soul.

“Love is the theme of the episode, which I hope we can all relate to. And my litmus test for any good work? Did I feel…”

The High-end TV Skills Council has commissioned a range of new training programmes for those looking to develop their careers in High-end Television, focusing on skill shortage areas within the sector.