Thelwell pony film in the pipeline 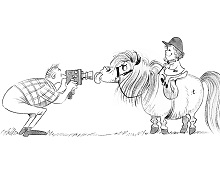 A new, live-action feature adaptation based on the famous illustrations by the late Norman Thelwell is in pre-production at Blenheim Films readying to shoot in North Wales later this year.

Merrylegs the Movie is based on the ‘Thelwell Ponies’, created in the 1950s by the cartoonist. The film follows Penny and Merrylegs, a timid pony who must overcome his greatest fears to find his own place in the world.


Candida Brady directs the feature, the first in a planned franchise centring on the Willowbrook Riding Stables in the remote mountains of Snowdonia. DoP Peter Field is also on board, as is stuntman/action co-ordinator Vic Armstrong.

Casting director Michelle Smith is currently seeking a young actor to play Penny, a character inspired by Thelwell’s daughter, and the search is also on to find a pony to play Merrylegs.

The film is intended for a 2023 release to mark Thelwell’s centenary.

Director Brady said: “This is a dream come to true to bring the much-loved artist Norman Thelwell’s legacy to the big screen. These iconic characters are universally treasured and we’ll be meticulous with the evolution of the ponies working with the very best in the field of creature animation to maintain Thelwell’s unique style, wonderful humour, and environmental spirit that his collection of cartoons represented. We can’t wait to introduce new audiences to the laughter, landscapes, and hilarious antics of Penny and the mischievous ponies.”

Thelwell’s daughter Penny Jones said: "I very much look forward to seeing Dad's ponies coming to life on screen so that a new generation can discover the iconic Thelwell pony - and their parents can rediscover characters they knew from his books when they were children.”

The film is set around the mountains of Carnedd Llewelyn Snowdonia in Wales.

Before We Die filmed in Bristol locations

Channel 4’s drama Before We Die, starring Lesley Sharp, filmed in various locations in and around Bristol last year.

ITV has greenlit a drama based on the real-life events surrounding one of Britain’s greatest miscarriages of justice.

Here is a sample of our current and previous work: The Pursuit of Love, The Crown, The Favourite, Friday Night Dinner, Killing Eve, An Extra… more Call: 01372 377111   |   Add to Shortlist

Pets On Set is a UK wide based animal agency who aim to provide professionally trained and handled animals to the film and TV Industry.… more Call: 07900 880406   |   Add to Shortlist

Animal Actors, over 35 years' experience in all aspects of training and supplying of animals, birds, reptiles and insects for the film, television and theatrical… more Call: 07710 348777   |   Add to Shortlist

Birds & Animals endeavours to provide consistent quality animal talent to the production of films, television and commercial programming. We were at the forefront of… more Call: 01923 680639   |   Add to Shortlist

Europe’s largest owners and suppliers of trained domestic and wild animals for the feature film, TV, still photography and live event industry. We have a… more Call: 01608 683389   |   Add to Shortlist

Here at Animal Wrangler Scotland we specialise in providing trained and well socialised animals for Film, TV, Commercials and all productions in between. Years of… more Call: 07837 080058   |   Add to Shortlist

We will supply, train and work animals for your production to achieve both the highest standards of film making and animal welfare. We can take… more Call: 01264 363407   |   Add to Shortlist

Trevor Smith, Managing Director of Animals Work, prides himself on providing any creature for filming, 'from a house fly to a hippo'. From sourcing and… more Call: 07956 564715   |   Add to Shortlist