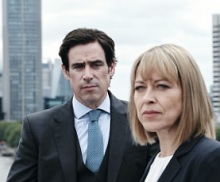 Production begins this week on the third and final series of legal drama The Split, with the four-month shoot based in London.

The series is written and created by Abi Morgan and follows the lives of the Defoe family, most of whom work in divorce law. Nicola Walker, Stephen Mangan, Deborah Findlay, Fiona Button, Annabel Scholey, Damien Molony and Barry Atsma star.

Sister makes the show for delivery to BBC One, utilising many London locations including Millennium Bridge and the area round St Paul’s, Hungerford Bridge, Kingston County Hall and Camden.

Sister is also busy in production with Pulse Films and AMC on the second series of Gangs of London, comic horror The Baby and international thriller The Power. Projects on its development slate include The Following Events are Based on a Pack of Lies, due to film later this year.

The company is also in post on a BBC Two adaptation of the Adam Kay’s junior doctor memoirs, This is Going to Hurt, starring Ben Whishaw.