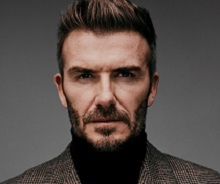 The series will see Beckham return to east London where he played football as a child. He will mentor a young grassroots side that is struggling to survive in the league. Sean Doyle exec produces for Disney.

Doyle, who is director of unscripted, said: “We are so thrilled to welcome David Beckham to Disney+. This is a fantastic opportunity to show the importance and impact of grassroots football in communities in the UK. The series will be exciting, dramatic, uplifting and full of heart and courage – everything David had in his own playing days!”

Beckham added: “It is fantastic to be making Save Our Squad with TwentyTwenty and to shine a light on the kind of grassroots football that I experienced growing up and which gave me so much at the start of my life in the game. I was so fortunate to have a long and successful playing career and now to have the opportunity to give back to these communities as a mentor is incredible.

“Developing and nurturing young talent is so important in the game and it is great to be working with Disney+ on this project.”

Save Our Squad marks the latest in Disney’s drive to source, develop and produce original productions at a local level, with the aim to create 50 productions in Europe by 2024.

Adrian Scarborough has been set as the eponymous lead in The Chelsea Detective, a new crime drama commissioned by Acorn TV from Expectation Entertainment and ZDF.