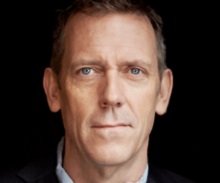 Why Didn’t They Ask Evans? will be delivered as a three-part drama, and marks the streamer’s biggest original commission to date.

Mammoth Screen, the prolific production company with a strong pedigree in Christie adaptations, is making the series with Agatha Christie Limited; their previous collaborations include The ABC Murders starring John Malkovich, And Then There Were None and The Pale Horse.

Why Didn’t They Ask Evans? follows the amiable Bobby Jones and his socialite friend Lady Frances Derwent. While looking for a lost gold ball, Jones discovers the crumpled body of a dying man who, with his last breath, gasps the cryptic question of the series’ title.

Laurie said he has been a lifelong fan of the story: “I loved this book as a nipper and still do. The hairs on the back of my neck haven’t properly settled down from the first time I grasped the beauty of the essential mystery.

“Since then, I have fallen deeper and deeper in love with the characters, and feel immensely honoured to have been given the chance to retell their story in this form. I will wear a tie on set, and give it everything I have.”

Helen Ziegler, director of television and executive producer at Mammoth Screen, added: “Everyone at Mammoth Screen is thrilled to be working with BritBox North America and the inestimable Hugh Laurie, as writer and director, on this new adaptation of Agatha Christie's Why Didn't they Ask Evans?

“His dazzling scripts take the mischief and cleverness of the original novel to a new level, and with Hugh sitting in the director’s chair, this really is going to be an authored treat for Christie fans everywhere.”

Production Intelligence subscribers can log in from 13th April for more on Why Didn’t They Ask Evans, such as the shoot dates, filming location and key HoDs including the producer, casting director and line producer.

Non-subscribers can click here to request a free walkaround of the site.