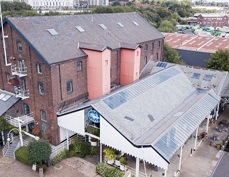 The £18m facility based at The Bond in the city’s historic Creative Quarter has had an investment of £3m approved from Greater Birmingham and Solihull Local Enterprise Partnership (GBSLEP) which will enable the project to go ahead, subject to planning permission.


The site is being developed by Oval Real Estate and Oval Developments (Oval).

The multi-media ‘cluster’ has a campus comprising 50,000 sq ft for independent TV production and creative content developers. Broadcasters will be able to work alongside producers at a site that ultimately aims to create a centre for film, TV, games and virtual production that will pave the way for new and immersive media content of the future.

Anita Bhalla, GBSLEP Board Director for Creative and Culture said: “GBSLEP’s investment of £3m reflects our commitment to the creative industries which we see as a priority sector that stimulates inclusive economic growth and a catalyst for job creation.

“The Creative Content Hub will be an exciting addition to the media landscape and at the heart of innovative production in the region. It’s also an exciting step towards creating a TV, film and multimedia cluster in the heart of Birmingham’s Creative Quarter, in Digbeth.

Create Central chair, Ed Shedd, added: “The concept of a Creative Content Hub was developed by the industry, through Create Central, to provide a means of kick-starting the sector post-pandemic. It is set to position the West Midlands at the forefront of developing new ways of working that will re-invent and future-proof traditional television, film and wider digital content production.”

Andy Street, Mayor of the West Midlands, said: “It is incredibly exciting that thanks to some brilliant collaborative working we have managed to get this world class Creative Content Hub off the ground.

“The West Midlands has some of the most creative talent in the world, but in the past we have been notoriously poor at nurturing and retaining it. That is one of the reasons I was so keen to get Create Central established, and this new hub will go a long way to both addressing that and re-establishing the West Midlands as one of the country’s premier film and TV destinations.”


The West Midlands’ profile as a production hub has been raised considerably in recent years with the success of Steven Knight’s period drama Peaky Blinders showcasing the locale. Knight himself is developing Mercian Studios, a film and TV production facility also planned for the Digbeth area.