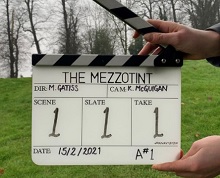 Gatiss, who also directs, said: “It's delightful to be bringing a little seasonal unease to the nation once again and this famous  MR James story is just the ticket. We’ve assembled a top-notch team to bring this eerie mystery - and a certain enigmatic old picture - to life.”|

Piers Wenger, director of BBC Drama, added: “I’m delighted that Mark Gatiss has assembled such an outstanding cast to conjure up another unmissable ghost story for BBC Two and iPlayer this Christmas. The Mezzotint is classic MR James, and the perfect slice of horror to thrill us this festive season.”