Save The Cinema starts Welsh shoot 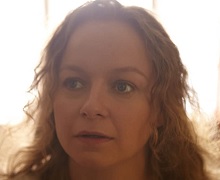 Filming is underway in Wales on Save The Cinema, directed by Sara Sugarman from a screenplay by Piers Ashworth.

Set in the 90s, the film is inspired by the life of Liz Evans (Samantha Morton), a hairdresser and key member of the local community in the small town of Carmarthen in Wales. Her mission is to stop The Lyric Theatre being demolished by bulldozers and turned into a shopping centre.


With the threat of demolition becoming ever more likely, Liz and friends barricade themselves in the cinema and with the help of postman-turned-local-councillor Richard (Tom Felton), they come up with a grand plan.

Based on a story by Lorraine King, the film is produced by Matt Williams, Piers Tempest and Karl Hall at FAE Film & Television and executive produced by Julia Stuart at Sky. Sky is majority-funding the film in association with Head Gear Films, LipSync and Ffilm Cymru.

Sarah Wright, director of Sky cinema and acquisitions at Sky UK & Ireland, said: “I’m thrilled to start production on Save The Cinema. Filmed in Wales and featuring the best of British talent, at its core is an incredible true story – one woman’s seemingly impossible dream to galvanise her community to stand up for local arts and all it represents.”

Filming starts on You Don’t Know Me

Filming gets underway this week on BBC One’s You Don’t Know Me, a four-part drama adapted from the book by barrister and novelist Imran Mahmood.

BBC One has ordered a new fictional crime drama from James Graham and House Productions about two shocking murders that took place in an already fractured community.
?

Hakan Kousetta, COO of television, See-Saw Films, has been appointed Pact chair for the next two years.

Netflix thriller to film in Manchester

Three of PD James’ best-selling Inspector Dalgliesh mysteries are set to be adapted for television with Bertie Carvel as the eponymous detective.