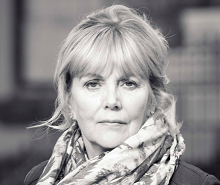 BBC One has commissioned an adaptation of Kate Atkinson’s Costa Award-winning Life After Life from House Productions.

The four-part drama has been adapted by Bash Doran and will be executive produced by House founders Tessa Ross and Juliette Howell, along with Atkinson (pictured) and Lucy Richer for the BBC. John Crowley will direct; Kate Ogborn produces.

Life After Life centres on Ursula Todd who dies one night in 1910, before she can draw her first breath. On that same night in 1910, Ursula is born and survives. She finds herself time and again, living and dying in different circumstances only to be reborn into a new, alternative iteration of life once more.

Ross and Howell said: “We feel hugely privileged that Kate Atkinson has entrusted the adaptation of her bestselling, award winning novel Life After Life to House. We have brought together an immensely talented team who love the novel as we do to: Bash Doran’s scripts brilliantly capture the heart and soul of the novel, the warmth and scale of its world and the extraordinary characters who inhabit it. All human life is here, told through the experiences of Ursula who keeps on dying and being reborn.

“And in John Crowley, we know we have a wonderful and ambitious director who brings huge heart, gripping storytelling and an extraordinary visual flair to this incredible story. We can’t wait to get started.”

Filming will take place in the spring.

The BFI and the British Council have unveiled this year’s Great 8 – the annual Cannes Marché buyers showcase for features from emerging UK filmmakers.

ITV has commissioned two documentaries to mark what would have been Princess Diana’s 60th birthday, on 1 July.

The team behind the Media Production & Technology Show (MPTS) has launched MPTS Connect Virtual Festival, an opportunity to participate in a wide-ranging schedule of online events.

Twickenham Film Studios, operated by TIME+SPACE Studios, has announced a £15 million development investment to expand and rejuvenate the site.