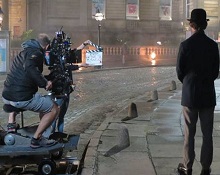 The green light was given this morning at the city’s planning committee to build two 20,000 sq ft sound studios on land adjacent to the iconic Littlewoods Building, off Edge Lane.

The city council has appointed contractor Morgan Sindall to construct the facilities, works on which will begin this month with a view to the stages being operational by spring 2021.

In July this year, the Liverpool City Region Combined Authority approved £17m to support the new film and TV stages, along with the Littlewoods Film and TV studios.

Liverpool City Council’s Film Office is overseeing the scheme and is in talks with major global production companies over the use of the stages from next year.

Liverpool is a major UK production hub, able to support large-scale projects, with grand civic architecture that easily doubles for other world locales.

The city is currently home to Netflix’s Munich 38 and the second series of Sky’s COBRA; it recently hosted The Batman, Netflix’s The Irregulars and The English Game, ITV’s Viewpoint and Sky’s Tin Star: Liverpool.

Joe Anderson, mayor of Liverpool, said: “I’m delighted we’ve got the green light to create these new sound stages and I can’t wait to see them welcoming their first productions.

“Being adjacent to the future Littlewoods Film Studios, the new sound studios will transform Liverpool’s ability to provide the TV and Film industry with a complete support package.

“Such is the interest in the city and in these new facilities we’re already getting calls about bookings before we’ve even built them!

“These sound studios also means the city will have all the right ingredients to be a ‘Hollywood of the North’ for training, production content and talent in Liverpool – which will lead to more investment and more jobs.”

Jimmy McGovern, whose latest project Time – a BBC TV drama - is being filmed in Liverpool, said: “I love the fact that Liverpool council is looking to build these new TV and film studios. Everyone knows how great the city is in hosting productions, but we can’t always complete a shoot here due to a limited studio capacity.

“These new studios will be a huge shot in the arm for the sector and especially for the hugely talented army of people who make the magic happen off screen, as they will save a lot of time wasted having to travel to other studios elsewhere.

“It’s also great news for young kids in our city and region wanting to get into the industry and in particular it’ll be a brilliant boost for the Kensington community which desperately needs this type of investment and the fantastic job opportunities it presents.

The cast has been confirmed on Working Title Films' adaptation of hit stage musical Matilda, with Alisha Weir (pictured) in the title role.

Step up to 1st AD in film

ScreenSkills is hosting a new training course for experienced 2nd ADs looking to step up to the role of 1st AD.

A huge thank-you to the UK production industry

We wanted to send a message to all our readers to wish them a very happy and healthy holiday. But I felt that a simple Season’s Greetings wasn’t going to cut it this time around. It’s not been a simple year.

New studios to open in Hartlepool

Work is underway on the north-east’s first dedicated film and TV studios, based at The Northern School of Art’s Hartlepool campus, with an aim to be open for use in the summer of 2021.