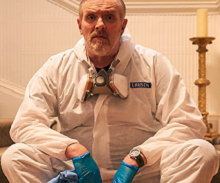 A six-week shoot begins this week on The Cleaner, starring Greg Davies. The project comes from Studio Hamburg UK and is a remake of the German comedy Der Tatortreiniger (Crime Scene Cleaner).

In the 6 x 30, Davies plays Paul ‘Wicky’ Wickstead, a state-certified cleaning technician with a very special field of work: as a crime scene cleaner he is responsible for the removal of any signs of death.

Davies has adapted the original, which was created by Ingrid Lausund and produced by subsidies of the Studio Hamburg Production Group.

At the time of the commission news, Vivien Muller-Rommel, managing director Studio Hamburg UK and executive producer of the show, said: “We are very excited to be partnering with the BBC, the Holy Grail of British comedy, on this show. Greg Davies has always been our top choice to portray our charmingly chatty protagonist, and we couldn’t be more delighted that he’s also writing the series.

"In times of a global pandemic, we all need more comedies. Fortunately, our protagonist already wears a mask by profession.”

The Flash sets up UK shoot

Much-anticipated feature The Flash, starring Ezra Miller, is now in pre-production in the UK readying to shoot next year.