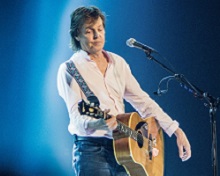 Netflix and Gaumont are partnering on a new animated feature based on the children’s adventure novel, High in the Clouds, by Paul McCartney, Philip Ardagh and illustrator Geoff Dunbar.

First published in 2005, the book centres on Wirral, a teenage squirrel who finds himself in the midst of a raggedy gang of young rebels who live high in the clouds.

Oscar-nominated director Timothy Reckard will be calling the shots from a screenplay by Jon Croker, with an original score by McCartney.

McCartney said of the project: “We are  thrilled to be partnering with Netflix. They complement what is already an amazing team with Gaumont and we can think of no-one better to be working with to bring our film to a global audience.

“I’ve always loved animated films and this is a hugely important passion project for me. I can’t wait for the world to see it.”

The government has announced a £500m restart scheme to aid UK domestic productions facing Covid-related insurance issues, which is estimated to cover more than 70% of projects.

The BFI has launched a £500,000 Covid-19 UK Sales Company Organisational Support Fund to support business development impacted by the pandemic.

Channel 5 has announced a slate of commissions from seven BAME-owned and managed production companies - a result of its BAME indie initiative launched last September.

Channel 4 is speeding up its decision-making process during lockdown with the introduction of fortnightly commissioning rounds.