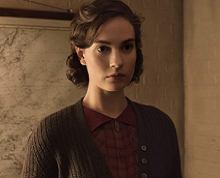 Nancy Mitford’s The Pursuit of Love is set to be adapted for BBC One as a three-part drama.

Moonage Pictures and Open Book Productions are partnering on the project with Emily Mortimer on writing duties.

As first reported on Deadline, Lily James is lined up to star in the mini-series, which is the first in Mitford’s trilogy about the upper-class Radlett family between the wars.

Production Intelligence subscribers can log in for more on The Pursuit of Love, including details on the producer, line producer and shoot dates.

Moonage is currently in production on the sci-fi comedy drama Intergalactic, which began production at Space Studio Manchester in early September.

Open Book Productions was founded by Charles Collier in 2018 as a joint venture between BBC Studios, Original Talent and Tavistock Wood.