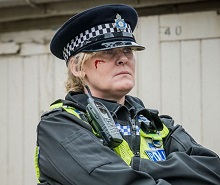 The six new episodes from creator Sally Wainwright are produced by Lookout Point with AMC Networks on board as co-producers. It is directed by Patrick Harkins and Fergus O’Brien, with Chris Clough as series producer, and Jessica Taylor as producer.


Executive producers are Wainwright and Lancashire, with Faith Penhale and Will Johnston for Lookout Point, and Ben Irving for the BBC.

When Catherine discovers the remains of a gangland murder victim in a drained reservoir it sparks a chain of events that unwittingly leads her straight back to Tommy Lee Royce. Her grandson Ryan is now sixteen and still living with Catherine, but he has ideas of his own about what kind of relationship he wants to have with the man Catherine refuses to acknowledge as his father. Still battling the seemingly never-ending problem of drugs in the valley and those who supply them, Catherine is on the cusp of retirement.

Wainwright said of Series 3: “I'm delighted to find myself back in the world of Catherine Cawood and her family and colleagues for the final instalment of the Happy Valley trilogy. It’s been wonderful to see the lasting impact this series has had on audiences all over the world.

"I’m thrilled that Sarah, James and Siobhan are back on board for what I hope will be the best season yet, and thrilled once again to be working with the wonderful team at Lookout Point, the BBC and our new colleagues at AMC.”

Bianchi Aviation supply classic and vintage aircraft and support services for the film and TV industry. Based at Turweston Aerodrome, a new UK rural location… more Call: 07836 318053   |   Add to Shortlist

UK Ambulance Transport is a Professional Private Medical company aiming to be an all in one solution. Our services include the following, Unit Medics Paramedics… more Call: 0300 303 5398   |   Add to Shortlist

Our fleet of appliances will cover all your fire protection needs regardless of size or complexity. Fully qualified and insured to do fire cover for… more Call: 0330 111 3635   |   Add to Shortlist