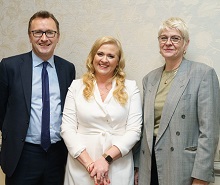 Entertainment Partners and Netflix have each pledged £250k to form a new £500k Production Guild of Great Britain (PGGB) Talent Development Fund, that will support the development and progression of film and HETV production talent across the UK.

Announced at the Guild’s inaugural Talent Showcase event held on 24 January in central London, the new PGGB fund will invest in specialist training for below-the-line professionals working in roles represented by its members, including production accountants, production managers, line producers and assistant directors, all of whom are in high demand in the UK’s booming production sector.

Lyndsay Duthie, PGGB CEO, said: “We are delighted to announce the new PGGB Talent Development Fund. With somewhere in the region of 20,000 extra crew needed by 2025, this investment comes at a pivotal time. This new Fund will help upskill future production talent – we thank Entertainment Partners and Netflix for pledging their incredible support. This will make a difference, add value and create a real legacy.”

“The Fund will immediately help build a more inclusive industry while providing the qualified, trained crew that is critically needed to support the explosion of film and high-end television production in the British market.  We look forward to welcoming the next generation of production talent in Great Britain.”


"Nurturing future production talent, particularly in these sought-after roles, not only helps bridge the skills gap and improve diversity, but builds on our long-term ambition to be the studio that provides the most meaningful training opportunities in the UK.”

Step up to line producer in HETV course still open

A ScreenSkills course in how to step up or over to being a line producer in high-end TV (HETV) is still open for applications.