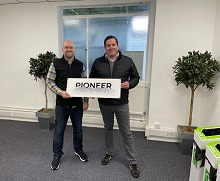 ADF recently opened a new office at Pioneer in response to the growth in the film and HETV market in Scotland and now Location One is joining alongside. Pioneer’s co-founder Jamie McCoy plans that the studio site will become a national production hub; Screen Facilities Scotland has already moved to the campus.

McCoy said of the new tenant: “We are excited to welcome Location One to our campus as Scotland increasingly becomes a hub for high-end productions. Our mission is to bring the industry and whole supply chain together on site and now with Location One’s new branch offering its high-quality services and equipment, we are one step closer to achieving this goal.”

Marsden Proctor, chief executive of facilities by ADF, added: “We are excited to be joined by Location One at Pioneer’s state of the art studios to bring our compelling and expanded offering to the growing Film and HETV market in Scotland. Location One’s new branch moves us closer to achieving our vision of becoming a One-Stop-Shop for Film and high-end TV production across the UK.


"We are already expanding our community in the region following the opening of our own office at Pioneer in October and look forward to the future opportunities this new partnership will bring.”

Crispin Hardy, founder and CEO of Location One, remarked: “Opening a branch in Scotland is the next step in our expansion plans and with a site like Pioneer’s, we now have the ability to service one of the few remaining emerging markets as well as help to establish a community for the industry in the region. We are excited to be joining ADF in Scotland, and in partnership with Pioneer, we look forward to the future prospects available to us.”

Image: Jamie McCoy of Pioneer and James Read of Location One.