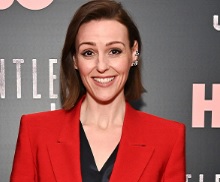 The three-part series was devised by Jones and screenwriter Anne Marie O'Connor and follows the lives of two sisters, Becca (Jones) and Rosalie, two sisters who have grown apart but who are reunited in tragedy.

The siblings travel to the Isle of Man when their mother Mary’s body is discovered there, but subsequent events reveal the extent of the double life Mary had been living. It transpires that Mary had created a whole new world for herself, called Maryland, while the sisters’ father Richard was left at home in Manchester.

Jones said at the time of the commissioning news: “I’m so excited to be working with Anne Marie on this project. We both immediately knew how we wanted this story to unfold and to have the support from ITV and Monumental Television to let us tell it in our own way has been a breath of fresh air.

“Maryland delves into family dynamics and the way in which we ‘label’ each other, sometimes never letting ourselves or our siblings break free from those roles. We look at how we grow apart from one another and how sometimes we don’t really know anything about the people we call our own.”

O’Connor added: “I’m thrilled to be working with Suranne and Monumental on Maryland and for ITV to have given us the opportunity to write a character-led show, at the heart of which is a love story about two sisters. From the start, Suranne and I have wanted to tell a story about the roles that are ascribed to us in families - especially as women - and to look at the legacy of a woman who decided to step away from the traditional role but wasn't honest about her decision.”