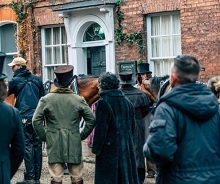 The series is the second Dickens adaptation from Steven Knight and Hardy’s company Hardy, Son & Baker - the first was A Christmas Carol - with FX Productions, Scott Free and the BBC also producing.


The series has taken in multiple locations around the UK during the six-month shoot, including Portsmouth, Beaulieu in the New Forest, Salisbury and Marlow. Much of the filming took place in Shrewsbury, a town with a wealth of period architecture, as it doubled for Victorian London.

Mark Hooper of the newly-launched Shropshire Film Bureau recently told our sister site, KFTV, of his hopes to raise the film-friendly profile of the region: “It aims to expand rapidly as a ‘go-to’ location for the film and TV industry… and looks to hit the ground running after recently welcoming the production team of Steven Knight’s Great Expectations.”

Knight said at the time of the commissioning announcement: "Adapting Dickens’ work is a delight. I chose Great Expectations as the next work to bring to the screen not just because of the timeless characters, but also because of the very timely story.


“A story of class mobility and class intransigence, told through an intensely emotional and personal first-person narrative. As the son of a blacksmith myself, Pip’s journey from the forge into society is a very special one to me.”

Production gets underway around now in the UK on Mickey7, a major new sci-fi film from director Bong Joon Ho and starring Robert Pattinson.

Why do I need a military adviser?

Paul Biddiss is one of the most high-profile military advisers working in film and TV production today.

With more than 24 years’ global deployment experience within the British Army, Paul has spent the decade since he left the army as a specialist adviser on feature film and HETV dramas, as well as providing technical surveillance and close-protection advice and services for private clients in the industry

A lengthy shoot on the second filming tranche of Apple TV+’s Slow Horses has just begun in London, to be delivered as Series 3 and 4.