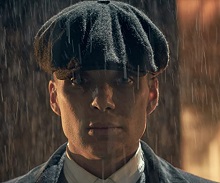 Due to air in early 2022, season 6 once again stars Cillian Murphy as Tommy Shelby, seen on the promo trailer (below) walking down a dark cobbled street.

Screen Manchester, the film office for Manchester, worked closely with the production’s locations team to facilitate access and permissions to a variety of locations across the city, which could double as 1930s Birmingham.


It was the vision of director Anthony Byrne to bring one of the show’s main locations to Castlefield, which subsequently provided the backdrop for several key scenes.


Peaky Blinders has been based at Space Studios Manchester since S5, and shot interiors across sound stages there. Screen Manchester were involved in facilitation from 2020 before filming took place in February, March and May this year.


Cochrane said of the location choice: "It was a pleasure to facilitate filming applications from this iconic BBC drama and we worked closely with the location manager and their team from late 2020.


“The requests for Castlefield were some of the most ambitious and complex we have facilitated to date but I am proud that we helped make the director’s vision a reality.


"I am excited to see how this stunning area of the city will look in this series and It has been wonderful to see the location in the first trailer.”