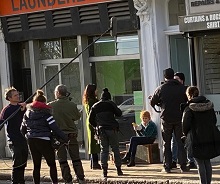 Directed by Oscar-winning Chloe Zhao, the film centres on a group of ten demigods (The Eternals) who join forces to protect the Earth from the Deviants.

The story is told on an epic scale, spanning the globe and human civilisation, with settings including ancient Babylon, the Australian outback and modern-day London.

Preparation for the London shoots in Camden High Street and Chalk Farm Road began with consultation and communication with local residents in July/August 2019, well in advance of the start of shooting, scheduled for January 2020.


This was one of the biggest shoots ever undertaken in the area - it is rare for Camden High Street and Chalk Farm Road to be closed for filming as they’re such busy thoroughfares. Councillor Jonathan Simpson lent his support to the project, and was key in ensuring the filming took place.

The only way to make the shoot achievable was for the work to take place overnight, when the local markets would be closed, adding to the remit of the locations team and their marshals.

The locations team set up a community meeting and the crew ensured they used as many local businesses as possible. These included a local venue on Camden Lock which was used for catering, and some new commercial office space nearby, which served as the locations teams offices. Many local shops were dressed and appear in the movie. FilmFixer also set up a local marshal to work on the shoot.


The shoot took place over five nights, but the prepping and dressing was underway before Christmas.

Belsize Terrace also featured in the London filming schedule, with a number of local organisations being paid to use their car parks as part of the solution for residents. The production team also made donations to local organisations including The Winch, the Hive and The Belsize Society (Residents Association).

Netflix is ramping up its commitment to UK-produced scripted content with a commission of five new dramas, all of which will film in the UK next year.